The ’80s brought us a lot of iconic movies and TV shows, from The Goonies to The Wonder Years to The Facts of Life, but none of those huge hits would have been possible without some seriously talented child actors. Is there a more indelible image from The Shining than Danny Torrance riding his tricycle through the halls of the Overlook Hotel? We don’t think so. Yet that movie’s young star Danny Lloyd isn’t an actor anymore, and neither are many of his peers. Read on to learn about Lloyd and 11 more child actors from the ’80s who quit Hollywood—plus why they decided to walk away for good.

RELATED: 13 ’90s Child Actors Who Quit Hollywood and Why.

Jeff Cohen will forever be remembered by fans of 1985’s The Goonies as Chunk. He played a smaller roles in Family Ties and Popeye and Son, but stopped acting in 1991 after appearing in the TV movie Perfect Harmony. Cohen’s decision, he admitted years later, was owed in large part to the fact that he was going through puberty.

“There were basically about four fat kids in town, so every time there was a fat kid role you saw the same people at the audition. It was survival of the fattest,” he said in a 2015 interview with the Daily Mail. “But when I hit puberty, it was a career ender for me. I was transforming from Chunk to hunk and I couldn’t get roles any more. It was terrible. My first love was acting but puberty had other ideas. It was a forced retirement. I didn’t give up acting. Acting gave me up.”

Barret Oliver is best known for playing Bastian Balthazar Bux in The Neverending Story, which came out in 1984, but he also appeared in both Cocoon and its sequel. His final role was in 1989’s Scenes From the Class Struggle in Beverly Hills, and for the past 30 years, he’s been missing from Hollywood.

Instead, Oliver has been focusing on a different passion: Photography. In an interview with Photoculture, he shared that he uses historical techniques in his photography to explore a different area of the art form. He hasn’t shared exactly why he walked away from acting, but it certainly seems like he was able to find something he loves doing more.

As a child, Jenny Lewis appeared in a handful of ’80s classics, including Troop Beverly Hills and The Wizard, but today, she’s far more famous for being a musician, both as the frontwoman of the band Rilo Kiley and as a solo artist. Initially, her retirement from acting was sparked by rebellion when she felt resentful of being the family breadwinner at such a young age.

“I had a Chelsea girl haircut, which is not cute. It’s a kind of punk hairdo that is a shaved head with fringe and a tail. That was how I rebelled. So if you’re auditioning for roles and you have like a skinhead haircut, you’re probably not going to get them. You catch my drift?” she told The Guardian.

You likely recognize Carrie Henn as Newt from Aliens—her only role as an actor until a voice role in the animated Thunder Island in 2020. Since her 1986 breakout performance was so successful, why did she decided to walk away from Hollywood for good? Henn’s heart just wasn’t in it, so she set down a different career path and became a teacher.

Aileen Quinn sang and danced her way into millions of hearts playing Annie in the 1982 movie version of the Broadway musical. With a few exceptions, including the Will & Grace revival and the 2014 series The Comeback Kids, the former child star is many retired from onscreen acting after opting for normalcy as she grew up.

Quinn told Broadway.com that she was actually under contract to make more Annie films, but when they never materialized, she embraced living her teenage years to the fullest and really immersed herself in acting on stage.

“I got to have a normal high school and a normal life outside of Hollywood. That’s when I started to delve into theater because I was under contract and could only take regional theater gigs. It’s when I got to really to grow up as an actress,” she told the site.

Though Wil Wheaton had some truly memorable roles in the ’80s as Wesley Crusher in Star Trek: The Next Generation and Gordie Lachance in Stand By Me, these days, he’s far more likely to be heard in a voice role than seen on screen. Why? Wheaton has said that he actually carries lot of trauma from being a child star.

“When I was a kid my parents forced me to become an actor, it was never something I wanted to do. Throughout my entire childhood I begged my mother to stop forcing me to go on auditions, to just let me be a kid and she never heard me,” he told Metro. “It was really important to her that I become famous so she could be the famous actor’s momager and it sucked. That choice cost me my relationship with my parents and as a consequence of that, I don’t really enjoy on-camera acting. It’s a little triggering and a little traumatic.”

These days, Wheaton selects the rare on-camera role he really connects with and supplies his voice to video games and animated movies and TV shows far more frequently.

RELATED: A Former Child Star Just Explained How She “Blew All Her Disney Money.”

On Family Ties, Tina Yothers played little sister Jennifer Keaton. But it was only a few years after the show ended that Yothers’ acting career did, too. She decided to pursue music instead, and she and her brother Cory started a band called Jaded.

“I think if I wasn’t who I am, maybe we would have had a major label deal a long time ago,” she told MTV in 2001. “A lot of bands that are in our position don’t have … the doubt we have to face all the time.”

Though she’s appeared on some reality shows, including Celebrity Wife Swap, today, 48-year-old Yothers mostly lives out of the spotlight and is married with two children.

Danny Lloyd will always be Danny Torrance from The Shining to us, even though he’s a 49-year-old father of six now. He’s only had one role since the ’80s: a cameo in The Shining sequel, 2019’s Doctor Sleep, in which Ewan McGregor plays Danny as an adult. So why did he leave Hollywood behind? In a 2017 interview with The Guardian, Lloyd explained that he didn’t have much success in auditions after the movie and, in his early teens, he decided he was ready to move on.

“I wouldn’t say it was upsetting. I always enjoyed it. It was exciting. But as I got a little bit older, it got kind of boring,” he said of acting and auditioning. “Then I had to tell my parents that I was ready to quit. Which they were fine with. They were never stage parents. They made sure I had a normal upbringing.”

After playing Cornelia in Santa Claus: The Movie, it seemed like Carrie Kei Heim had a long acting career ahead of her. But just a year later, she’d play her final role—Nikki Ferris in the made-for-TV sequel, The Parent Trap II. Though she hasn’t spoken out about her choice to leave acting, she did end up going to law school and becoming an attorney before moving into writing novels, according to her personal blog.

Claudia Wells is one of the rare child stars who quit acting only to grow up and come back to it. After starring as Marty McFly’s girlfriend Jennifer in Back to the Future, she was unable to reprise her role in the sequels because her mother had been diagnosed with cancer.

“My mother had fourth stage lymphoma,” she said in a 2015 interview with HuffPo. “I had so much happening personally that deep down, I never considered reprising my role and deep in my soul, I knew [leaving the business] was the right choice for me.”

Years later, Wells did end up jumping back into acting, and she’s been working pretty steadily since 2008.

For more celebrity trivia sent right to your inbox, sign up for our daily newsletter. 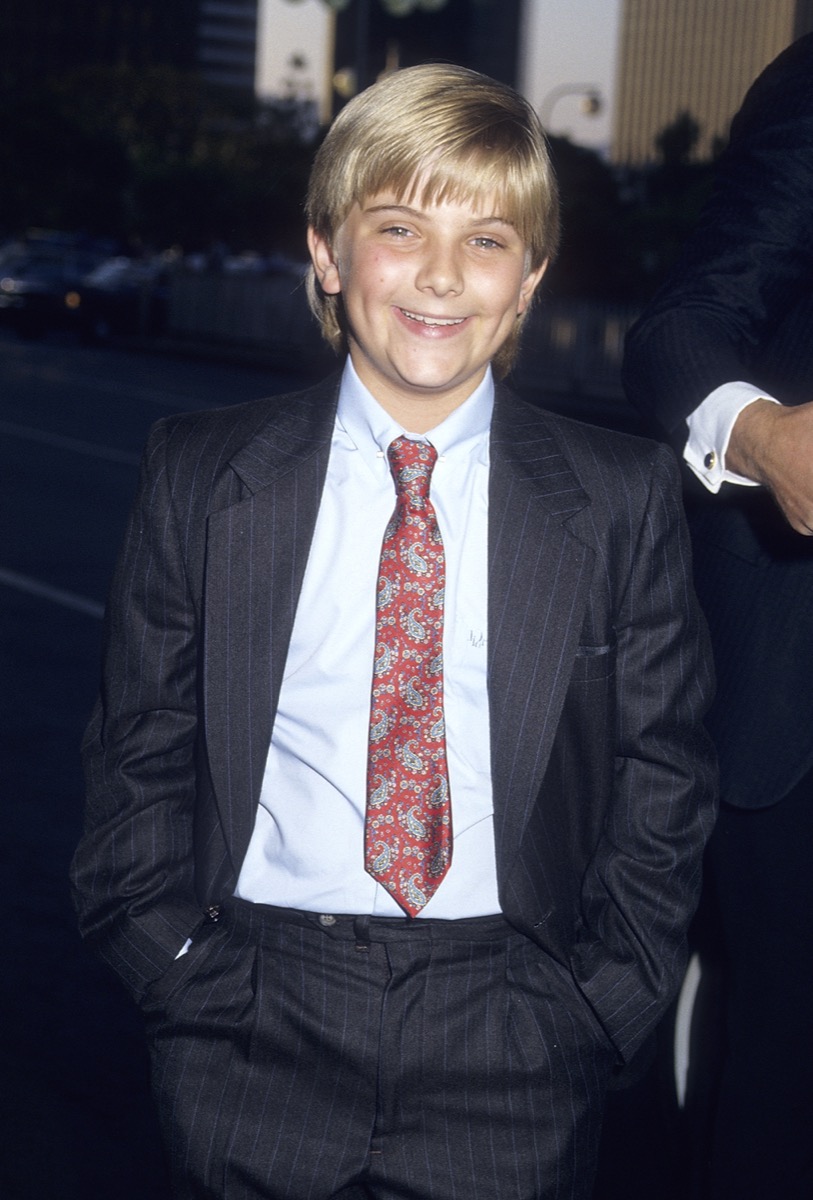 If you watched Growing Pains, you probably recognize Jeremy Miller as younger brother Ben Seaver. Since the early ’90s, though, Miller has mostly been off the radar, and aside from a few guest starring roles, if he’s acting, it’s in smaller, more low-key projects. According to his Instagram account, today, he’s instead a producer, podcaster, and chef.

“I still am remembered as just the cute little brother, so branching out into more dramatic roles and things like that has been a little difficult,” Miller admitted in an interview with Studio 10 in 2017. “As an artist, as an actor, of course you want to do some different stuff.”

On The Wonder Years, Josh Saviano played Paul, the best friend to protagonist Kevin (Fred Savage). His life today is pretty different from what it was like back then—mostly because he’s a lawyer, no longer an actor. While he did pop up in a couple of Law & Order episodes, Saviano is mostly busy with the firm he founded, Spotlight Advisory Group, which helps entertainers and influencers with their branding.

In the ’80s, Chad Allen was in lots of popular shows, from Our House to My Two Dads to Webster. But after another decade of success in the ’90s (including his role on Dr. Quinn, Medicine Woman), Chad left Hollywood. He didn’t make his retirement official until 2015, however.

“My life has taken me on a very different trajectory and after 30-plus years as an actor. I made a decision a couple of years ago to let go of that side of my life go and I’ve been focusing on my education,” he announced in a YouTube video, sharing that he was going back to school to become a clinical psychologist.

The 10 Most Popular Movies on Netflix Right Now — Best Life

Top 3 Benefits To Having More Muscles

The 3 Worst Shoes for Back Pain, Experts Warn — Best Life